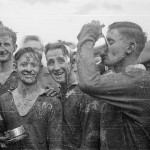 Last week, the Boks were the width of a rugby post away from beating England at Twickenham. This week, they were a layer of dubbin away from losing to the French in Paris.

Replacement flyhalf Elton Jantjies made a hash of the touch finder from a last-minute penalty awarded to the Boks. But with just two seconds on the clock, winger Damian Penaud brushed the touchline while fielding the kick.

Two seconds!! And on such unbelievably tight margins are international matches – and careers – decided!! Last week was doom and gloom; this week a bright new dawn for Rassie Erasmus’ Boks.

The fact that it included a myriad of controversial decisions from the four officials on duty is a story for another day.

Today it is about sifting through the match stats to see how the Boks managed to lose the possession and territory battle, carry less, kick less, and make more handling errors, yet sneak the W!

Losing slightly fewer rucks and mauls than the French contributed, despite the loose trio looking very unbalanced and at time ineffective.

But if looking for a single stat that really differentiated the sides on the day, one needs to look no further than the dominant tackles. Sure, the Boks missed 19 tackles, but of the 153 made, 24 of them were dominant, with 3 of them contributing to the 6 turnovers won by the visitors.

The structure still looks a work in progress – Aphiwe Dyantyi disconnecting with the other 2 defenders up the left touchline early in the game speaks to that – but defence remains 80% attitude and a very good reflection of a team’s overall character.

If last week looked organised and efficient, this week was the complete opposite, at times even looking as if there was a lack in interest! Unlikely, and more a reflection of growing pains for a side still under construction.

That can be coached. Character can’t. The Bok beer glass remains half full!

CLICK HERE for all the match stats from Paris …