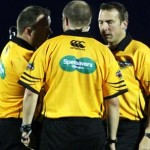 All the talk will be around the match officials handling of Owen Farrell’s last-minute tackle on Andre Esterhuizen – quite palpably a dangerous shoulder charge that should have resulted in a penalty to the Boks, if not a yellow card to Farrell.

But let that not take away from what the match stats confirm: this was a game the Boks should have put away much earlier.

54% possession, 61% territory. Both Handre Pollard and Damien de Allende breaking tackles at will. England giving away penalties like a butcher giving away fatty droewors at a Banting convention. The Bok scrum doing some proper damage…

It was the Boks’ game to lose, and lose they did! Ironically it was via a Farrell penalty goal from a scrum infringement earned by replacement prop Harry Williams, who managed to get the better of Wilco Louw.

Other contributors were a truly diabolical lineout performance powered by some very poor throwing from Malcolm Marx, a myriad of coach-killing errors that put paid to some effective and efficient attack, the call not to take points when they were available, and a missed pot at goal from out in front by Pollard.

671 metres from 111 carries to deliver 6m per carry for the Boks. England only managed 4.6m per carry. At times, the Boks looked really good with ball in hand. It’s the defensive stats from England that are perhaps more impressive, though. They only missed 15 of the 198 tackles asked of them. Six were dominant, while 9 forced turnovers fuelled the Bok mistake fest.

The home side also kicked more (33-26), and more effectively, carving off 3m more per kick. The stats prove it every single week – it’s easier to play rugby without the ball than it is with it. Here’s more proof!

Losing the ball in contact will have coach Rassie Erasmus counting sheep, while the Boks made a mess of both kick ins that came their way after taking the lead. There is an old adage in rugby: The points don’t count until you take the kick in!

Individually, Pieter-Steph du Toit made the most tackles (16) and the second most carries (12). This while playing lock, and that’s why it remains his best position. It’s a massive bonus for Boks to get this sort of performance from a tight forward, giving Erasmus more leeway with his loose trio selections.

It seems I might be in the minority, but I thoroughly enjoyed the game, and do not see losing to England – ranked 2nd in the world at the beginning of 2018, and a side that beat the Boks convincingly at Newlands a few months ago – by 1 point at Twickenham as a train smash.

Just think about where the Boks were a year ago! But perhaps the time has come to stop comparing this side to that dreadful era, and instead to what we generally expect of this great brand.