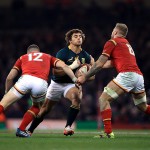 As part of a tactical ploy reckons TANK LANNING, coach Warren Gatland limited the Boks to just 5 lineouts in the game, putting the lid on a key attacking Bok asset.

A disappointing finish to their European tour for Boks as a tactically astute Welsh side defeated them 20-11 at the Principality Stadium in Cardiff.

Clearly as part of a tactical ploy, Warren Gatland’s home side limited the Boks to just 5 lineouts in the game, and managed to poach 1 of those 5. Having won all 8 of their own put ins, the Welsh were able to put a lid on a key attacking asset in the relatively limited Bok armoury.

It was a smart play that worked well on the day.

And having made the call to kick less in Cardiff, the Boks made more carries than Wales, and as such more metres with ball in hand, but a failure to execute saw the visitors struggle.

Pieter-Steph du Toit (11 carries), Franco Mostert and Steven Kitshoff (both on 10 carries) were the designated ball carriers for the Boks as they aimed to get gain line ascendancy, but often found themselves working alone, especially in the second half. Hence the high number of handling errors and turnovers conceded. A proper momentum killer.

In a clear departure from what had worked in the previous Tests, out back, on 11 carries, Handre Pollard and Jesse Kriel were tasked with doing damage with ball in hand, often skipping Damien de Allende, who only made 2 carries all game. An obvious attempt to add some width to their game. But that width then makes recycling the ball a lot tougher.

Both sides also had very different kicking strategies. The Boks generally kicked from 9 (Embrose Papier 7, Ivan van Zyl 3, while 12 of the Wales’ 24 kicks came from Gareth Anscombe and Dan Bigger at 10. The Boks were leading the kicking contest 11-9 at half time, but ended up making 1 kick less (24-23) come full time as Van Zyl made less use of the boot.

Wales scored two early tries through Tomas Francis and Liam Williams, which Anscombe converted, both via some poor Bok defence, and this scoreboard pressure seemed to add to what was by far the most disorganised performance under coach Rassie Erasmus.

The South Africans now return home from their month-long tour of the northern hemisphere with two wins and two losses.

“Today (Saturday) was perhaps the first time that I felt we were outplayed after we were always in with a chance in all our other games,” was the forthright assessment of Erasmus.

“They came with no surprises and we knew exactly what they were going to do, but I felt we didn’t adjust our plan like we should have. Wales were good with their kicking game and solid in defence and although we created opportunities our finishing and discipline let us down,” added Erasmus.

Skipper Siya Kolisi, did manage to see some positives after the game:  “We are making progress and although we are nowhere near where we want to be, we are headlining in the right direction.”

A look at the match stats from Cardiff