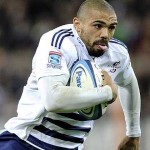 Last week it was the voories, this week it is the show-ponies. With just the playoffs to come, TANK and ZELIM debate which backs were the greatest in Super Rugby history!

Ahhh, the peacock showponies get their chance to shine. Just remember that while the backs get to decide the margin, it’s the forwards who decide the result!

A real world, play on a Saturday, team is about making the whole greater than the sum of the parts, hence the need to look at combinations. But today we have the opportunity to just look at the parts, and NOT make it work as a whole!

As such, in essence, I have picked players who could be used in a rugby dictionary to define the number on their back. And players who have had the biggest impact on the tournament.

The half backs pick themselves, an amazing feat in itself. Both players would be in contention for the “Greatest players to walk the earth” award.

Smith and Nonu are the reason I got into Super Rugby, and became an avid Canes fan. So yes, perhaps I am biased. But Smith was the ultimate in making players outside him shine, and Nonu the ultimate in saying thank you. Magic in motion.

Out wide, Habana defined finishing, Lomu redefined the game of rugby (having moved from flank, something that will have my colleague in raptures), and the Paekakariki Express is the most potent running fullback the game has ever seen.

CLICK HERE to see what Zels had to say …