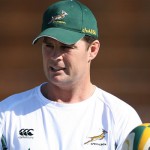 After the messy defeat against Wales in his first game in charge of the Boks, Tank and Zels of All Out Rugby debate what it is that has the national coach reaching for the Stilnox.

Having earmarked Trevor Nyakane as the man to tame Mako Vunipola and Joe Marler in Joburg on Saturday, despite having Wilco Louw and Frans Malherbe available, I am guessing that Rassie already has his local Stilnox supplier on speed dial.

And as my learned colleague has rightfully pointed out, Erasmus will also be scratching his head over who will get the ball from the base of what might be a creaking scrum to his new flyhalf. But having already been asked to change his captain, and now politely requested to pick a different hooker to the one he originally had in mind, the new Bok coach has been confronted with what was always going to be his biggest challenge – managing upwards!

Social media is another tricky hurdle for a modern-day Bok coach, and that will add fuel to the fire. Erasmus says he learned a lot about the media (be it social or mainstream) and how to deal with it in Ireland. But this is South Africa.

The organisation that appointed him have given Erasmus more rope than any of his predecessors enjoyed, and they will now be keen to use said rope to reap a few benefits of their own. Those benefits might not always be aligned with the coach’s objectives.

As history shows, it always starts off like a butterfly landing on a petal, but it changes to a bulldog eating porridge pretty damn quickly when the pressure is on.

Erasmus will have gained valuable experience while plying his trade in the Cape, where the internal politics are at their most vitriolic, but let’s remember that it was precisely those poisonous undertones that drove him away.

Do the wounds remain raw, or have the scars given him a thicker skin?