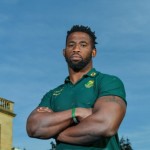 As South Africa celebrates the milestone appointment of Siya Kolisi as the Springbok captain, Tank and Zels of All Out Rugby debate whether it was the right move.

It’s a no-brainer and it should have happened a year ago when Warren Whiteley had to withdraw from the French series.

In 2012, Heyneke Meyer’s selection masterstroke was to eventually name Francois Louw, Willem Alberts and Duane Vermeulen as his starting loose trio. They played 17 Tests as a combination, winning 13 of them, and were regarded as the best trio on the planet in 2013. Perhaps the best the Boks have ever produced?

Blunderbusses with ball in hand, gain-line bullies, a handful at the collisions, and fiercely competitive at the breakdowns. Front-foot ball by the bucket load, something so vital to the Bok cause. And perfectly balanced.

In an effort to replicate that balance and power, Rassie Erasmus could have kept Louw and replaced Alberts with Jean-Luc du Preez which, together with Vermeulen, is a pretty damn exciting loose trio option.

But Louw has been injured, Du Preez is not Alberts, and Vermeulen is four years older. And the 2018 Boks simply cannot put out an all-white pack.

So, given Bismarck du Plessis’ skill at the breakdown, Siyamthanda Kolisi adds an athletic, physical, industrious, ball-carrying balance. As the only one of the three that could play at 6, 7 or 8, that utility sees him adding value to a pack that simply has to win the set piece, breakdown and collisions against England.

Kolisi’s family story reflects his character, as do his interactions with the media and public. He is an out-and-out warrior who wears his heart on his sleeve. And that heart bleeds green and gold. So once secure of his place in the run on XV, he is the obvious choice to lead the side.

It’s a hugely poignant moment for South African rugby, and also a hugely exciting one!