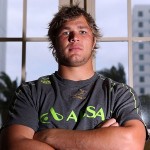 With veteran Duane Vermeulen set to miss the Rugby Championship, the Tand and Zels of All Out Rugby debate who should claim the Springbok No 8 jersey.

Tank Lanning – Warren Whiteley
Vermeulen was monumental for the Boks against England. More than a game changer, he was a key component in a complete regime change.

As a package, he is simply irreplaceable, so looking ahead to the World Cup in Japan next year, having Vermeulen fit and available is a non-negotiable for Rassie Erasmus.

It also means that in the interim, the Boks need to box clever, with a view to having a plan in place should Vermeulen not be available, for whatever reason.

Warren Whiteley at No 8 is the obvious first port of call. Not only was he the incumbent Bok skipper, but also one of the very few shining lights to emerge during the Harry Crocker seasons of Allister Coetzee’s term.

I understand that one buys a dog if loyalty is desired, but out of sheer politeness, Whiteley deserves a shot at the No 8 jersey in the newly-created environment. I mean, even Elton Jantjies got a chance to prove us wrong.

Should Whiteley fail, then he will rightly be gone. But until then, I would employ him as the 8th man in the existing trio with Siya Kolisi (playing closer to the ball), Jean-Luc Du Preez and Pieter-Steph du Toit.

Should that not work out, Erasmus could try a ball-hawk like Francois Louw or Marco van Staden at 6, with Kolisi playing a more roving role at 7.

The bottom line is that there is no like-for-like replacement for Vermeulen, so some sort of tweak to the side’s balance will have to be made – as was done to accommodate Kolisi, and that seems to have worked out pretty well.

Whiteley will add value as both a player and leader.

CLICK HERE to see what Zels had to say.