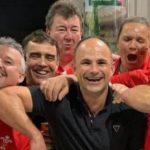 But for his post-match pose with a few Welsh fans, Jaco Peyper would have referred the Rugby World Cup semi-final between the All Blacks and England on Saturday.

This according to an article on the SA Referees website.

Peyper refereed the quarterfinal between France and Wales, during which he sent French lock Sébastien Vahaamahina off for grabbing Wales’s Aaron Wainwright around the neck and then striking him with the back of his elbow. The referee consulted his assistants and the TMO, examining replays with them. He then sent Vahaamahina off the field, showing him a red card. It is a decision that has found general acceptance, including by Jacques Brunel, France’s coach.

Wales won the match by a single point and its many red-clad supporters celebrated in the streets of Oita. A group came across referee Peyper and had a picture taken with him in which he and others simulated Vahaamahina’s back elbow strike. The picture appeared on social media, and there was an outcry amongst disappointed French supporters.

“That was on Sunday,” says the article, which does not carry a by-line.

“On Monday, World Rugby chose Peyper for the semifinal match between England and New Zealand. On Tuesday morning they took him off the match and instead appointed Nigel Owens, saying: “World Rugby can confirm that the match official’s selection committee did not consider Jaco Peyper for selection this weekend.”

In effect he was suspended, not allowed to perform for a match. That is what would happen to a player guilty of foul play on the field.”

The article goers on to say: “Peyper’s involvement in the picture hardly qualified as foul play. It also is highly unlikely that he would have posed for the picture with the intention of publishing it for the world to see. It seemed merely a bit of fun, and most people would be happy to see a referee acting as a normal person. It would certainly not have endeared referees to that group of Welsh supporters if he had rebuffed their friendly joy.

Did World Rugby suspend the players who seriously misbehaved in a bar/club at night? They did far, far worse than Peyper did.

Rugby is still a game which is played and therefore should be enjoyed. Referees are a part of that game. Surely nobody in his right mind would expect them to stride off like solemn undertakers to post-match solitude.

In the announcement of the referees for the semifinals, World Rugby’s chairman Sir Bill Beaumont said: “I would like to congratulate Nigel and Jérôme, the assistant referees and TMOs on their selection for the semi-finals.

“These are the best of the best.”

Better than Peyper? Wasn’t he generally regarded as the best-performing official after the quarterfinals?

Woodward wrote: “Referees are not immune from criticism but I support Jaco Peyper 100 per cent in having a little fun with Welsh supporters.

“It’s ludicrous that the so-called incident was investigated in any way.”

He added: “Jaco Peyper was out relaxing after a huge game and the day a referee cannot enjoy a beer and a joke with either the players or fans is the day rugby has lost its way.”