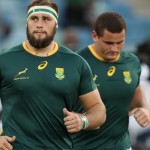 No fan of the prop switch, former WP tighthead prop TANK LANNING, in his All Out Rugby column, sheds some light on why Thomas du Toit’s switch to tighthead prop may well turn out to be inspired.

Those poor souls who have taken the time to suffer my Tweets and columns on the subject, will know full well that I am NO fan of switching a loosehead prop to tighthead.

This primarily because it is like asking a lock to play centre, such is the difference in skill requirements come scrum time, but also because it has tended to happen at the highest level, instead of taking the player through a process that needs to start at club level.

Think Coenie Oosthuizen, Trevor Nyakane, and Jacques van Rooyen. All more than competent loosehead props, asked to do a job at tighthead, and suffering the consequences – on a very public stage.

It’s actually unfair on the player.

So when fellow All Out Rugby columnist Craig Ray reported yesterday that Sharks coach Rob du Preez had told him that giant young prop Thomas du Toit will only be used at tighthead this year, my heart sank. “Agh no, not another one …”

Having constantly outshone Bok stalwart Beast Mtawarira at loosehead last year – at both franchise and national level – I was so looking forward to seeing him and Steven Kitshoff own the Bok scrum this year. These two are right up there with the best in the world, perhaps even in the class of the one and only Os du Randt!

But having had a few quiet reflective sips of the crispy golden nectar, I have a feeling that this may well turn out to be an inspired move.

For a few reasons:

It will take hours and hours of hard graft – a perfect pet project for Bok scrum guru Peter de Villiers perhaps? But here’s to the Paarl Boys High schooled woolly mammoth providing some salve for the wound we have at tighthead prop.

IN CLOSING: Take a gander at this video I made with Oli Kebble. We take a look at the requirements of both the loosehead and tighthead, this with a view to what referees are penalising.