Former Bok coach Jake White spoke at a fundraiser at Emperors Palace in Kempton Park yesterday, and Die Burger have published the following quotes from the function in their newspaper today – as translated from the original piece on their website. 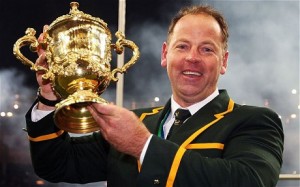 “If you can’t score at least four tries against Argentina, then there is a big problem.”

“Heyneke was always going to get criticism because of his background with the Bulls. He was chosen because of the success he achieved as Bulls coach and it will naturally play a role in the way he coaches the Boks”

“If, for example, he has to choose between Gio Aplon and Zane Kirchner, he will choose Kirchner every time.”

“The current Bok management team is the most inexperienced in world rugby. There is no ways those guys will stand up to Meyer. At this stage they are just happy to be there and trying not to make too many mistakes. I don’t think there is anyone there who would question his way of doing things”

“Meyer thinks he will achieve success by playing big, strong redundant rugby, but only time will tell”

“You get two type of Bok coaches: those that have been fired, and those that are yet to be fired”