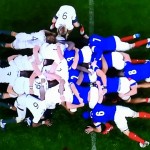 Skew scrum feeds rob rugby of the promised contest says TANK LANNING, but this new feed under the flank’s chest is just pulling the piss says the big man.

Is this not just pulling the piss?

Forget the result for a moment. How are we POSSIBLY allowing this excuse for a scrum feed? pic.twitter.com/ViaUN1G0K4

The above clip NOT to have a go at Faf de Klerk or the Boks. All teams are doing it. And as a coach, I would take this from a referee every single day. Hell, I might even introduce it as an option at my next scrum session. Coaches and players must push the legal envelope. Richie McCaw taught us that.

But as a custodian of the game – A game that “Aims to promote a fair contest for possession while also giving an advantage to the team putting the ball into the scrum”, this is simply unacceptable.  And for the so called best referee in the world to let it go, is also unacceptable.

But this is not a day for beating those poor whistle-men about the ears.

We simply have to see the scrum return as a fair contest. Otherwise all we have is rugby league.

The days of the hooker striking on opposition ball are long gone, but the 2018 version of the scrum laws has at least made the strike on your own ball compulsory. Which was intended to eliminate the need for a skew scrum feed … Hah!

Robbed of the big initial hit used to gain early scrum ascendancy, scrum coaches around the world bemoaned the strict policing of the straight scrum feed, saying that it negated the advantage that should be afforded to the side feeding the scrum.

Given the safety requirements, and under pressure to rid the game of multiple scrum resets, the game’s governing body have seemingly given in. Hence referees not policing the scrum feed like they were implored to do initially – albeit with the scrumhalf’s shoulder (and not their head) aligned to the middle line of the scrum – and hence the plethora of pesky skew scrum feeds these days.

But this new feed that goes under the flank’s chest, thus bypassing the loosehead prop’s legs completely, takes the skew scrum feed to a whole new level!

Yes, the side awarded the scrum, much like the team awarded the lineout, deserve some sort of advantage. But you also want the side competing for the ball in these two primary phases of the game, to have a chance of stealing it. Especially in a game dominated by such structured and organised defences. Turnover ball gives sides a shot at a less organised defence.

So bring back the straight feed I say.

The side feeding the scrum, now obliged to strike, will have to set a little higher. And that in turn will lead to fewer resets. But with only seven sets of feet on the ground, as opposed to the opposition’s eight, it does make them susceptible to being shoved off the ball.

Which was a big issue while the powers that be insisted that the ref decide when the ball got introduced to the scrum.

Scrumming is about power and technique, but primarily it is about timing. So the new law that allows the side feeding the scrum to control the timing of the feed gives them a significant (but fair) advantage in that they get to time their shove with the feed of the ball using the hooker’s tap and an internal call.

Yet the straight feed keeps it a fair contest. Hell it would be nice to see a defending pack go for the strike rather than the 8 man shove one day!