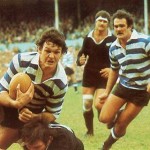 A tale of how Tank Lanning got to cycle alongside his schoolboy hero, taking in some breath taking French countryside, while discussing all manner of things. Sublime does not come close to describing the experience.

Most rugby fans will remember the 19th of September 2015 as the day the Boks went down 32-34 to Japan in their first game of the World Cup. It was, after all, a pretty damn enormous upset!

And while the game, and result, will be forever etched on my mind, it will be for another reason.

That being a properly painful peach that not even the complimentary beer at a pre-game hospitality event at the Brighton Community Stadium could numb!

This thanks to the two days I had spent on a particularly small and vicious saddle cycling from Paris to Brighton as part of rag-tag bunch who had chosen to accompany Ron Rutland finish his epic “Fat Man on a Bike” journey from Cape Town to London.

“Lettie’s ride – a proud South African’s 27 month, 43 000km bicycle expedition through every country on mainland Africa, and Europe, to the 2015 Rugby World Cup in London – supporting the Springboks, and celebrating health, vitality, mobility, adventure, and a special life”, is how Ron summed it up.

The special life being that of Nix “Lettie” Haynes, a dear friend of Ron’s taken too early after fighting the bravest fight imaginable against the evils of cancer. RIP Lettie.

Motivated by a life void of complications, and challenged to push himself beyond any physical and mental capabilities, Ron travelled solo and unassisted from the V&A Waterfront to the Brighton Waterfront, on just his trusty bicycle!

So who was I to say no when Ron suggested joining him for the final push from Paris?

Upon arrival in the French capital, excitement levels were fairly Eiffel Tower like, with apprehension levels even higher given that not many of us had done anything near the required training for the first day’s 125km onslaught.

But all that got forgotten when I spotted a certain Morne Du Plessis on the start line.

Yep, the self-same oke who had managed the World Cup winning 1995 Boks under the slogan “One team, one country”. The same oke who was awarded the Order of Ikhamanga in 2007 for “excellent achievement in rugby”, established the Chris Burger Petro Jackson fund, and the same guy who was inducted into the International Rugby Hall of Fame in 1999.

Also the same guy who had spent a good many years on my bedroom wall as crayon drawing in a ludicrously large gold frame. Yep, Morne du Plessis was my hero!

And he could lead. And he spoke so well. Hell, in my mind, he could even walk on water!

I got to meet him while at school, and had done some work with him on the Players Fund, but when Morne calmly cycled up to me on our foray to Brighton, and said “Kom Tankie, let’s see what those pistons you call legs can do”, there was no way I was turning him down, no matter how much those pistons protested.

And that’s how I got to cycle alongside my schoolboy hero, taking in some breath taking French countryside, while discussing all manner of things, including his plans for the “Hundred Club”, the now operational club that welcomes in only players who have played a hundred games for their country. Sublime does not come close to describing the experience.

Role models do not always turn out the way you thought they might, and I sometimes find it unfair for people simply blessed with a sporting talent to then also be burdened with the role, but boy did I pick a good ‘un.

This column was first published on Brightrock’s Change Exchange.